E-moped sharing company felyx has raised an investment of € 24 million. The company that offers shared e-mopeds on a ride basis wants to expand in Europe with this, starting in Germany and France. Felyx, was founded in 2017 by Quinten Selhorst and Maarten Poot. The company is market leader in the Benelux and currently active in Amsterdam, Rotterdam, The Hague, Eindhoven, Groningen, Delft, Haarlem, 's-Hertogenbosch and Brussels. A moped can be rented via the app for € 0.30 per minute. 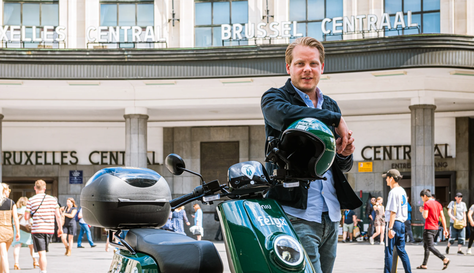 The new financing has been made available by De Hoge Dennen Capital and the current major shareholder and entrepreneur Anne-Marie Rakhorst. De Hoge Dennen Capital brings relevant knowledge and experience, such as their investments in the online supermarket Picnic and the e-bikes from Qwic. Sustainable entrepreneur Anne-Marie Rakhorst is also participating in this round. She is the investor and major shareholder from the very beginning.

Felyx is undergoing strong development and has grown to 130 employees in three years. Since the first trip in Amsterdam in 2017, felyx users have covered more than 14 million kilometers on the dark green e-mopeds throughout the Netherlands and Brussels. This saved more than 1,600 tons of CO2 emissions. With the new investment, felyx mainly focuses on Germany and France. The market for shared mobility is growing fast. It is still the case that a vehicle is stationary on average 90 percent of the time and is only occasionally used for a ride.